MY SOURCE OF REALITY IS LIFE 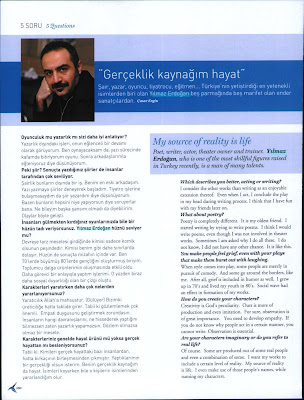 POET,WRITER,ACTOR,THEATER OWNER AND TRAINER.YILMAZ ERDOĞAN,WHO IS ONE OF THE MOST SKILLFUL FIGURES RAISED IN TURKEY RECENTLY,IS A MAN OF MANY TALENTS.

Which describes you better,acting or writing?

I consider the other worka than writing as an enjoyable extension thereof.Even when I act,I conclude the play in my head during writing process.I think that I have fun with my friends later on.

Poetry is completely different.It is my oldest friend.I started writing by trying to write poems.I think I would write poems,even though I was not involved in theater works.Sometimes I am asked why I do all these.I do not know,I didn't have any other chance.It is like this.

You make people feel grief,even with your plays that make them brust out with loughing.

When style comes into play,some people are merely in pursuit of comedy.And some go around the borders,like me.After all,grief is included in humor as well.I grew up in 70's and lived my youth in 80's.Social wave had an effect in information of my works.

How do you create your characters?

Are your characters imaginary or do you refer to real life?

Of course.Some are produced out of some real people and even a combination of some.I want my works to include a certain level of reality.My source of reality is life.I even make use of those people's names,while naming my characters.