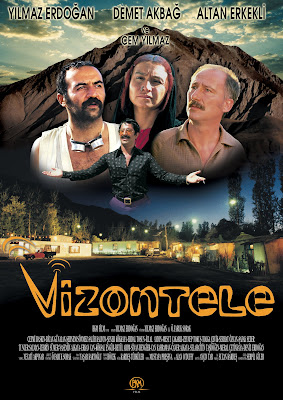 Vizontele is a 2001 Turkish comedy-drama film, written and directed by Yılmaz Erdoğan and co-directed by Ömer Faruk Sorak, based on the writer-director's childhood memories of the arrival of the first television to his village in the late 70's. The film, which went on nationwide release on February 2, 2001 (2001-02-02), won three Golden Orange awards and was one of the most successful Turkish films to that date. A sequel, entitled Vizontele Tuuba, involving the director and most of the original cast followed in 2004.

The mayor (Altan Erkekli) of a small village in Southeastern Turkey in the 70's bitterly opposes the activities of sleazy opportunist Latif (Cezmi Baskin) who runs open-air film screenings and seeks to break his monopoly over village entertainment with the introduction of the first television (called Visiontele by the locals). The mayor recruits a crazy electrician called Emin (Yılmaz Erdoğan) and some of his office staff to help him to set up the signal receiver on the highest position of the mountain. While Latif seeks to undermine his efforts by decrying television as the work of the Devil and a slap in the face of Islamic tradition. The story is based on the childhood memories of the writer-director Yılmaz Erdoğan of the arrival of the first television to Hakkâri, Turkey in the 70's.